Why does anyone work at Hot dog on a Stick?

Yes, the outfits were embarrassing, but I was trying to get a job and no one else seemed to be hiring.

One day, I was eating at Hot Dog on a Stick in the Sherman Oaks Galleria mall with my mom. As I waited at the pick up counter, I could not help but notice a large “now hiring” posted where no one could miss it. I looked at my mother just about the same time she had noticed the sign. She said, “let’s get an application.” I said, “let’s not.”

I was in 10th grade, super shy and worried what people at school would think of me wearing one of those outfits they called, “uniforms.”

So, my mother asked for an application and we went home. I started to think on it, reconsidered, and filled out the application.

Not 24 hours later they called me for an interview. I think I went in the same day, was hired and started working that weekend.

I can tell you with all honesty, it was one of the best arm-twisting decisions I ever made.

The owner, Dave Barham, was an outstanding and truly inspirational man. He truly made me feel that I could one day open my own business – no matter what type of industry I wanted to work in. Restaurant, retail, whatever.

His motto was that if we set our mind to something, and are willing to make sacrifices and work really hard, anything is possible.

Dave started his life on a farm. In the 1940’s, he started to see the success hamburger joints were having. He loved corn dogs and wondered why there was no fast food hot dog option. His vision was to fill the void in the industry with a freshly made (never frozen) hot dog on a stick option.

He came up with a recipe, served it with the best tasting fresh-made lemonade on the planet and opened his first store at Muscle Beach in 1946. 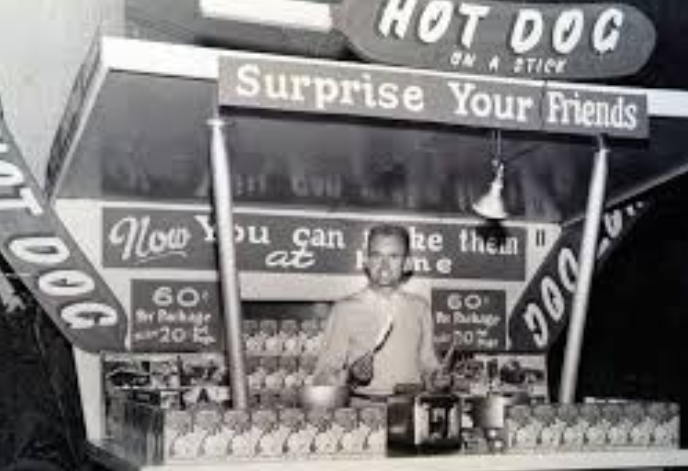 In the 1980’s. Dave inspired me to open a boutique

In the 80’s, I was growing up as a valley girl in the San Fernando Valley in California. By the time I was hired to work for Dave, he was a huge success with dozens of locations. What I would soon come to learn was that he was also an amazing man who deeply cared about the people who worked for him.

I get to meet Dave in person

He was busy and important, yet, when a co-worker of mine invited him to a high school play she was performing in, he came to the show! He also invited our entire store’s crew out to dinner afterward so we could talk and celebrate my co-workers success in the play. We talked and ate and laughed while we got to know Dave much better.

Dave was creative, fearless and inspiring. Like my Aunt Mary, he showed me another way to live. His motto was that we can be anything we want to be in life, you just have to be willing to work really hard at it. He talked a lot about getting started in his business. People told him that there was no way he could do it and so he just went out and did it.

He wanted fresh recipes, and fresh product and we did make everything in the store, fresh, from scratch – every day.

Dave also had a handbook where everything we were supposed to do was written down. How to make lemonade, how to make hot dog batter, how to clean the bathroom, etc. Everything was taught to us step by step. It was such a great learning lesson. If you want people to do things right, you need to make a plan, write it down and train everyone to do it correctly from day one.

Dave was living proof the sky’s the limit

He really was living proof that the sky’s the limit. I know he didn’t just inspire me that night either. After our dinner, a few days later, in the store, my manager showed me an image of the personalized license plates she was ordering for her car.

I had no idea what that meant but she said it was, “believe and achieve – inspired by Dave Barham.”

I lost touch with my store manager her after my time at Hot Dog on a Stick, so I have no idea what she ever went on to become, but I hope it was something really good.

What I do know was she was every bit as inspired by Dave as I was.

A turning point to opening a boutique

Working for Dave was a turning point in my life. Getting to know him up close and personal, and learn all about his business and how it grew, was one of those significant moments you know happen for a reason.

I believe my life could have been really, really different.

The dream of my boutique business gets launched

Getting to know Dave, and learning how he started his business with very little training, or money, launched my business brain into orbit.

He was just an ordinary guy. Smart and diligent. His goal was to work hard and be willing to get dirty. He passed his beliefs onto me and I’d imagine quite a few other people as well.

Who do you know in your life that inspires you? If you know someone, give them a call and ask if you can interview them. If you don’t have someone, I hope you will read the pages of my open a boutique blog and find inspiration there.

You must have a passion and you must believe in yourself. Once you do that… watch out world.